A physical installation at various Verizon Destination Stores.  Sets of dual monitors with touch foils allow for customers to explore the features of Verizon device-offerings from smart phones to tablets to wifi hotspots.

As the Producer at Invodo, I advocated for our agency’s needs for asset acquisition and graphics creation.  I collaborated closely with the other agencies to make sure that timelines and features were met and provided weekly updates to the client.

Launched late in Quarter 4 of 2013 at the Mall of America, it has been consistently updated with almost every Verizon device launched since then.

The project was conceived and executed by a variety of agencies from AKQA, x2o Media, Pace, Invodo, etc. 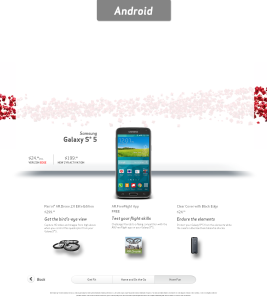